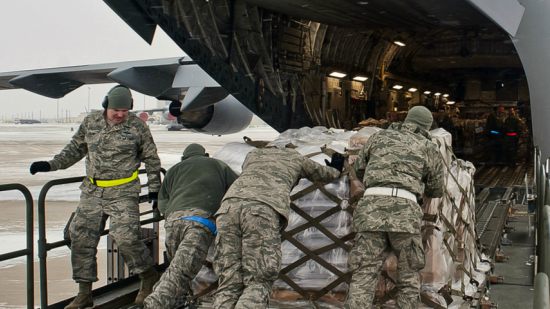 ACS has been assisting relief organisations since its founding in 1990, and has been a part of practically every global relief operation since then. We’re taking a look back at the last 10 years and the charters where we’ve been able to really make a difference.

ACS has been assisting relief organisations since its founding in 1990, and has been a part of practically every global relief operation since then. We’re taking a look back at the last 10 years and the charters where we’ve been able to really make a difference.

Floods affecting nearly 25,000 families hit parts of Bolivia causing the country’s President Evo Morales to declare a state of emergency after weeks of heavy rain; this had been caused by the climatic phenomenon known as La Niña, and had devastated several parts of the country. We received an urgent call from a Spanish based relief agency to carry 10 tonnes of much needed water purification equipment, medical kits, tents, blankets and mosquito nets from Madrid. The cargo arrived on the 12th February 2008, just three days after the agency approached us.

When a cyclone hit Burma we operated 37 cargo flights utilising a wide range of cargo aircraft – including A300s, DC8s, IL-76s and AN12s – to the region. In addition to sourcing cargo aircraft from outside suppliers for charter requirements, we also had several aircraft that were on long term lease which could be airborne within 90 minutes of us receiving confirmation of a flight.

We were one of the first aircraft charter brokers to get civilian flights into Goma, and carried 88 tons of emergency aid for the 250,000 people that had fled their homes. We used two Ilyushin 76 aircraft to carry the cargo to Entebbe (Uganda) from Fujairah International Airport (UAE), to then be transferred on to an aircraft capable of landing at Goma airport. Using AN-12s would have caused a delay due to having to wait for the exemption permits so we chartered an L-100 Hercules for the six rotations. We used our local offices to ensure speed and also arranged for one of our bilingual charter experts to be present to ensure no communication issues.

ACS ASSISTS THE PHILIPPINES IN 2008

When USAID was faced with a colossal relief operation after Typhoon Fengshen – also known as Typhoon Frank – hit the region on 20th June 2008, ACS was on hand to help get an Airbus A300F with 31,000 kilograms of cargo from Pisa, Italy to the Philippines. We only had one day to obtain all the permits in addition to organising offloading equipment when no conventional equipment was available, but we were able to get that emergency equipment to the 3,620 families who had been left homeless by Typhoon Frank.

In a country already struggling with hyperinflation rendering what little food there was unaffordable; an outbreak of cholera put further strain on dwindling medical resources. We worked alongside a Spanish relief agency to fly aid into Zimbabwe, chartering an IL-76 aircraft to carry 17 tons of cargo, which was delivered to help relieve the suffering of the tens of thousands hit by the epidemic sweeping the country.

In 2008 Haiti was torn apart by two hurricanes in the space of a week, destroying 11,000 homes and leaving 850,000 people in desperate need of aid. We were approached by a Spanish relief agency to charter an aircraft to get their aid to Haiti but due to the urgency of the situation there was only 24 hours to organise this charter - including permits. We used an Antonov-12 to carry the 12 tons of urgent relief cargo as it was cost effective, rear loading and with internal loading systems allowing cargo to be loaded quickly.

In 2010 when a formidable earthquake struck Port-au-Prince in Haiti, we were called in to help transport approximately 80 firefighters, aid workers and journalists to Haiti as soon as possible due to the substantial damage and lack of ground equipment at Port-au-Prince Airport. As the airport was unable to take larger aircraft, three of our account managers flew out to the Dominican Republic to manage ground operations and oversee all flights out, setting up a system for larger aircraft to fly into San Domingo. After landing, the team used smaller aircraft to fly response equipment and any required personnel to Port-au-Prince.

Due to the Libyan Civil War, we were needed to help the evacuation of over 4,500 passengers from Libya in one of the largest and most complex evacuation operations we had ever faced. We had a member of staff in Tripoli to help manage ground operations and help with the logistics of chartering with passengers from many nationalities including, Turkish, British, American, Portuguese, Spanish, Vietnamese, Chinese and Thai. We were the first civilian charters out of the country due, in part, to our global network.

We chartered a Boeing B747-400 from Nairobi to Maputo in conjunction with the charity Save The Children. It carried almost 100 tonnes of building supplies in order to build shelters for the thousands of people left homeless by the floods earlier this year. Following the severe downpours that battered the country at the beginning of the year, swollen rivers burst their banks and flooded homes. We offered to arrange the flight permissions in advance of the charter being confirmed, as we knew they could take up to 48 hours and we didn’t want a delay once everything else had been agreed. The aircraft positioned into Nairobi less than 15 hours after Save the Children gave the go-ahead.

ACS ASSISTS THE PHILIPPINES IN 2013

Typhoon Haiyan had swept through six central Philippine islands, claiming around 10,000 victims in the city of Tacloban alone, and leaving many hundreds of thousands homeless and requiring urgent aid. As soon as we heard we began developing a situation report for the region: checking airport details and aircraft availabilities, so that we could advise relief agencies as soon as they called. We ended up booking over 500 tonnes of cargo to be flown out, on various aircraft types and had staff on site in Cebu and Tacloban to help coordinate.

After the violence in Iraq worsened, we were asked to help with evacuations from the country extracting more than 500 foreign nationals out of the troubled nation. We were asked by various clients from across the globe, including organisations in the UK, USA and China, utilising a variety of aircraft, including Airbus A320s, B737s and Embraer 145s for the evacuations. Due to our global network we were able to keep on top of the security measures in place.

After the first earthquake we had been inundated with calls seeking our help so we began sorting permits in readiness. As soon as the airport was open to civilian aircraft we had a man on the ground, who coordinated all of our aid flights coming in with the Red Cross. We flew in aid on a variety of aircraft including Antonov-12s and Airbus A310s and A330s. After the second quake, the ACS team member in Nepal slept in a hotel lobby for four nights, and continued getting permits and coordinating aid charters daily.

After a devastating hurricane struck San Juan in Puerto Rico our help was needed once more. The hurricane had wiped out power for the entire island and we were tasked with arranging an Ilyushin-76 charter to get a new transformer to an electrical facility in San Juan. With roads blocked and most communication channels down, we had to ensure the arrival and offloading of the giant transformer onto the waiting vehicles. We were able to get a man to San Juan to help coordinate and deal with ground handlers which ensured it went off without a hitch.

Private cargo and group charters often mean the difference between life and death in times of natural disaster or conflict. Whether you’re looking to transport goods, personnel or join a global relief effort, make sure ACS is your first call.